I Am Contribute, And So Can You

Yes, that's a really bad riff on Colbert’s book title. Ok, now that that's out of the way, a new study from the consulting firm McKinsey and Co proves what many of us already kind of know: people like to share. In fact, one third of all Internet users now contribute to the net weekly. YES, one third! And it's not just the kids and the 20-something MySpace and Facebook generation they're talking about. Those guys are actually at 70% per week. 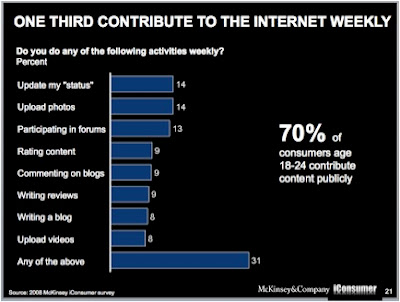 From McKinsey’s iConsumer Study conducted in October 2008
Sample of 20,000 US Internet users.
With the common wisdom being that a very small percentage of people online contribute original content and only 10% are somehow active with 90% being passive info-voyeurs, the numbers from the iConsumer report represent a huge shift. And if we assume that 70% of people 18-24 contributing weekly is a trend indicator, this speaks volumes about the direction that things are heading.

Why is this happening? And what might it mean? Is the study…
Witnessing my DP (domestic partner) @juleshanna’s new Twitter addiction it was easy to frame her new obsession as a leading indicator of broader adoption. She’s gone from being relatively quiet on the contributor front, to becoming an active Tweeter in the last few months.

Not so fast says the study. While the iConsumer study proves that people are sharing and contributing online more than ever before, it's also saying that groups of people exhibit very different behaviors. In fact it identifies seven distinct segments of user behavior.

So while living here in Silicon Valley can leave us to believe that the rest of the world finds Twitter and all the other services that we like to obsess about as compelling as we do, that is actually not the case at all and probably won't be for quite some time. Different cohorts spend their time online in very predictably ways doing very different things. Want to find out who you should be targeting? Talk to McKinsey.

All said, the bottom line is that behavior IS changing. And fast it would seem.

I am not at liberty to post the entire study, but ping me if you want more detail and I’ll put you in touch with my friend at McKinsey in Palo Alto who leads the practice that did the study.
Posted by Unknown at 5:40 PM

I would love to get my hands on this report or portions or summaries of it. I heard about it in a podcast. Any idea how to get it?