What I Learned from Watching a Baker in Brooklyn 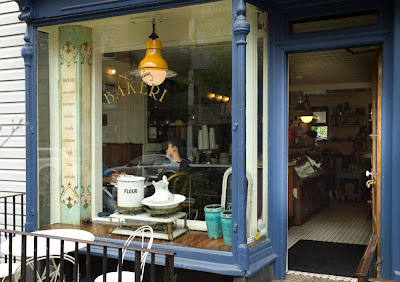 I learned a tiny bit about what it takes to run a great bakery this morning. And not just any Bakery. I am sitting at Bakeri at the corner of N 8th Street and Wythe Ave, in hipster infested Williamsburg, Brooklyn. Yet, in spite of a clientele that must exceed the national average of tattoos per square inch by a significant margin, walking into Bakeri is like stepping into a time capsule from a different era.
Try to imagine what having a sensual bread and pastry fantasy dream would be like? Bakeri, which in full disclosure was conceived and is owned and operated by my sister Nina, is that dream. 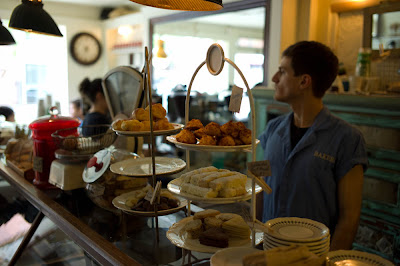 The beautiful marble counter, antique furniture and décor has been brought to Brooklyn from Argentina by Nina and her husband Pablo. The space is just small enough to be intimate, but not so small that it feels crammed. I saw people waiting for their latte for ten minutes, all the time with a smile on their faces.

As I sit by the door watching customers walk in, they stretch up on their toes a bit, peering to get a look in the counter at today’s selection from the baking elves in the basement. Their faces are filled with wonderment and eager anticipation. Yet their expressions reveal something else too. It took me a while to figure it out. Then I realize that it is a simple look of happiness. They are happy the way young children are happy and delighted when you bring them their favorite meal on their birthday.

Bakeri it turns out, sells happiness. 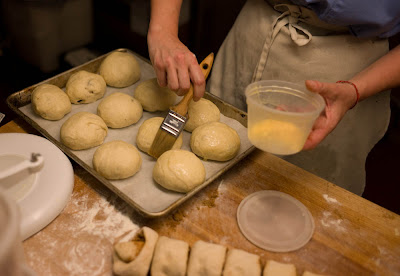 I visited Nina in the basement this morning and witnessed the toil and care that produces cinnamon rolls that taste like your grandmother could have made them and savory bread puddings so tasty you don’t want to eat them due to the inevitable truth that every bite will fill you up while causing the pudding to disappear. For me though, the all time favorites are the “bolle med sjokolade” -- baked bun with chocolate -- and the “skolebrød” made with the same cardamom spiced dough as the “bolle”, but filled with vanilla custard. Even better than the ones I had as a kid growing up in Norway.

I don’t drink coffee, but the New York Times recently rated Bakeri as one of the top places to get your morning java fix in all of NYC. I hear it’s really good.

I am nibbling on a baguette that any French baker would be proud to call his own when some questions pop into my mind. How do you make a “product” that consistently pleases and even makes people happy? How do you create something that causes people to wait with eager anticipation to discover the delights of your hard toil? 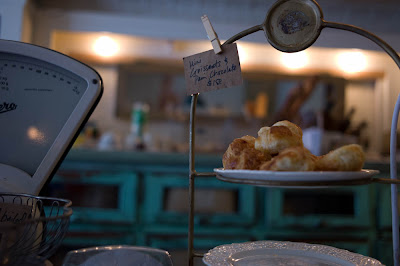 I’ve been in the “product business” most of my life. I don’t bake artisanal breads. In fact I don’t even know how to make a good cappuccino, but I have developed many software products over the years. Sitting here today, I realize that what Nina is doing to make Bakeri stand apart, what gives it a special flavor that the guy next door simply cannot copy, her secret sauce if you like, relies on the same ingredients that all great products are built of.

So what are these ingredients? Simple: vision, commitment, drive, focus and accountability. In order to bake a standout product Nina is a hands on product owner involved in all the issues that affect her business, small and large. Yet she has also assembled a dedicated team that has ownership and responsibility to take the ingredients and mix them in a way that meets daily demand and to respond to customer feedback in real time. Most important, the product evolves and improves over time in response to seasonal, team and customer influences. Bakeri is an agile operation in the truest sense.

It’s not clear that Nina could scale Bakeri to become a big business. More important, it’s not clear that she wants to. She knows who her customer is and she is true to the quality of her product. The recipe that Nina is following to make Bakeri a high quality product, is creating strong customer loyalty, is causing the word of mouth to travel fast and has made the New York Times write about them several times in their first few months of operation. 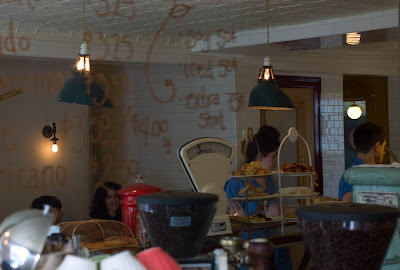 I doesn’t matter whether you are a Fortune one hundred corporation or a fifteen person operation in Brooklyn, the recipe, ingredients and organizational structure you need to create great product are the same. Loose track of this and your product will become stale.
Posted by Unknown at 1:59 PM 2 comments:

Experiences and design – many more products and services will emerge built around experiences and design. On-demand customization and personalization will become the expected norm. I have predicted mass customization for a long time. And I will predict it again for this coming decade. Our communications devices, our information portals, our clothes, our carrying cases, our notebooks, our furniture, our transportation devices (cars, bikes, skate boards…) will all be configured and designed to reflect who we are and to meet our individual needs and styles. Web as platform – the web has become a platform and it will keep on growing in every dimension – ubiquity, speed, storage and breadth of services. I’ll resist the temptation to make another Moore’s law reference and simply remind you how big your hard drive was ten years ago. While the web became the technology and platform of choice for most software developers in the past decade, the same technologies will invade our “peripherals” during the next decade. Web technologies will run on and in everything from hand-held devices, to household appliances to bikes and cars. The Internet of things is the Internet of the next decade. A key enabler will be web technologies. These are some of my quick reflections. Interested in more? Thanks to some of the people I follow or am “friends” with I came across a few other worthwhile musings and predictions. Read them and laugh: Five Tech Themes for 2010 - The New York Times Bits Blog’s trend predictions.
Predictions 2010 - John Batelle’s contributions. He’s actually takes a flier on a few such as Apple’s rumored “tablet” computer being a flop. Oh, and he goes back and rates his performance from previous years. Refreshing!
Trends for 2010 - J.D. Meier’s Blog offers a very nice, pretty comprehensive summary of upcoming trends. Includes a comprensive list of references. A very good read!
A VC - Fred Wilson a NYC based Venture Capitalist shares his thoughts about where he’s going to focus this year.
2010’s hottest contenders: 8 products to watch - VentureBeat's contribution. A good, thoughtful roll-up of web services and software products that will make a difference in the next year.
Google’s To-Do List for 2010 - Kevin Kelleher takes a fresh approach on GigaOm and gets the "best prediction quote" award with "Predictions are like Christmas toys — they come tumbling out in late December, only to be cast aside and forgotten a few weeks later.”
This Week On TechCrunch: The seventeen best ‘best-of… …of the year’ (and the decade) lists, of the week - Tongue in cheek roll-up of best-of lists.
Top Ten Digital M&A Deals For 2010 More TechCrunch Silicon Valley navel gazing.
NYT Op-Ed Guest Columnist Ten for the Next Ten - Rock star Bono makes his top ten predictions too. With humor!
Let me end with a wish and plea for some old fashioned, low-tech tolerance.

Diversity, openness and transparency are powerful forces. When matched with tolerance they become unbeatable. I hope that this emerging decade will be one that we can look back on as a decade of openness, acceptance and increased tolerance. Our technologies can and I hope will, fuel openness and transparency and they will connect us to each other and to information like never before. And once we're connected lets recognize that we all have a voice and a choice how we use it. Let's use it to practice tolerance.

Tolerance is something we can all practice in our daily lives. Tolerance does not have to mean acceptance. It simply means making room for points of view and perspectives other than your own. Stay open to influence, integrate a broader range of people, entertainment, information and experiences into your life. It may even make you a happier and more fulfilled person than if any of the above predictions came to fruition.

Posted by Unknown at 8:20 PM No comments: